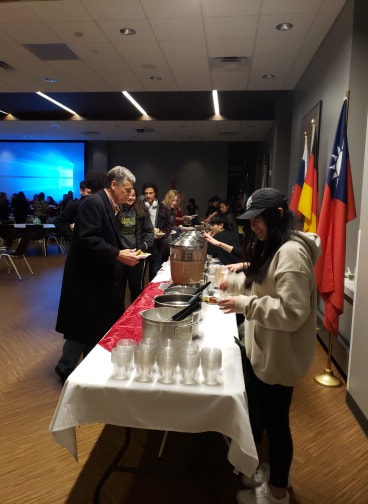 International Food Festival invited the community and its students to cook food that comes from all around the world. Some countries that were included were Japan, Albania, Haiti, and China.

Global Student Association, or GSA, hosted the event in the campus center. There were 12 tables with their own unique food options available for the high turnout of students and families.

Bora Ajdini, an international student from Albania, was one of the volunteers to cook for her country. “I made a bold choice in using a dish with spinach. I knew it wouldn’t be the most popular choice of the night, but this particular food means a lot to me. When I was younger, my aunt would have me over, and we would spend the afternoon making Byrek.” Ajdini said. This is a dish made up of Philly dough, spinach, and vegetable oil.

She added, “I loved cooking with my friends, but the best part was of the night was seeing the number of people that came to enjoy our food and the happiness of my friends serving the food. It was a great night.”

Chloe Skibinski, a junior, represented Canada. Skibinski made a dish called Poutine, which is fries, brown gravy, and cheese curds. “We chose this dish because it is one of the best-known dishes in the country,” Skibinski said she had a great time at the event, and that is was nice to see so many different organizations coming to help out.

Shizuku Takayama, a senior and member of Japanese Association, presented for the country of Hawaii. They served four different kinds of pancakes during the event. These included chocolate, caramel, peanut butter, and plain pancakes. Takayama said the turnout was higher than they expected. “We prepared over one hundred pancakes, but we ran out. There were so many people who came back for seconds.”

After the meals were served, Jaliyah Henderson and Tali Coleman showed off their Hawaiian dance. The pair even invited guests to join them and learn the dance themselves. “I know the dance was a big hit. So many people came up to learn the dance and some people even said it was their favorite part of the night.” Skibinski added.

Jaliyah Henderson, president of GSA, thanked the crowd for coming and invited everyone to come back next year to enjoy more unique foods from around the world.