The hard work and dedication of a semester of play practice was showcased in the Bradley Theatre in the performance of “One Flew Over the Cuckoo’s Nest,” which was riveting, funny, sad, and at times had me clenching my fists in emotion.

The play tells the story of Randle McMurphy, a man sent to an insane asylum rather than a regular prison. There, he meets many strange characters and attempts to liven up the place. McMurphy immediately begins to disagree and argue with the head nurse Ratched, as she has always ruled over the psychiatric ward with an iron fist.

There were times during this performance in which some of the things that Nurse Ratched said made me angry with her character. Even though it was all acted out on a stage, I was emotionally invested during some of the more intense parts of the play.

The delivery of this play, an adaptation of a book with a very famous movie, was pretty darn smooth. It really seemed as if each actor had figured out what the personality of their character was supposed to be like and molded it with their own. This came together in a nice ensemble of personalities as the play continued. 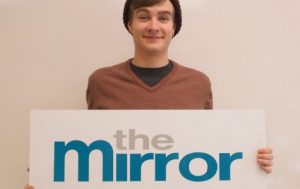 McMurphy was the likable womanizer. Chief was the tall and soft spoken one. Then there was Nurse Ratched, the least likable character I have ever witnessed. During the group therapy sessions, the way she weaseled in questions that always implied some fault of the character being spoken to was infuriating.

The stage that the staff set up was not an elaborate one, but it had three main areas that were well designed. The central ward area had an extended stage and little pits for the actors to go into during scene changes or to simulate sleeping. The right side of the stage had a front desk for what would be the psychiatric ward. It looked quite accurate from the audience’s point of view, with a small window and phone to top it off.

Lastly, there was a surgeons table where the scene in which McMurphy is administered shock therapy after the urgings of Nurse Ratched occurred. This was the most brilliant scene, as all the lights went off and all one could see was the figure of McMurphy in a straightjacket thrashing against his bindings as he was being “shocked.”

Overall, this performance was magnificently done, and everyone involved should be proud of their hard work. The play left me feeling a little sad, as it did not have the happiest of endings. However, something that left me feeling happy was seeing the smiles and congratulations that the actors were greeted with that evening.