2015s “Star Wars: The Force Awakens” is the only film of the year that could pry me off of Netflix and send me to the theater, and I’d wager the same applies to most broke college students. The seventh installment in the epic space opera saga, and the first to premiere in ten years, is easily in the running for title of “Most Hyped-Up Film of All Time,” and it’s objectively one of the most seen.

With that in mind, I’m doing something a little different this week: I’m assuming readers have watched the film. If you haven’t, then I fully recommend it. Despite some story issues, it’s a joy to watch, boasting fresh practical effects and focused, heavily-choreographed action that’s hard to come by these days, alongside director JJ Abrams’ trademark realistic dialogue and effectively low-key humor.

Wait … what’s that, you say? The internet has already spoiled the film for you, so it doesn’t matter if you read this? Well, that’s a shame. In response to the film’s hype, some internet users dedicated themselves to spoiling the film’s reveals and climax for as many people as possible as soon as the first screening commenced, turning the “twists” into a veritable meme in an attempt to ruin the viewing experience for everyone. This was unavoidable. However, the only way these spoilers are capable of ruining the film is through the film ruining itself.

Misery-minded people didn’t seem to get their hands on the spoilery goods until they saw everyone’s favorite pilot Han Solo get impaled by a lightsaber in the computer-generated flesh. However, deeper within the internet, “Star Wars” fanatics were readying their tissues for the inevitable scene a year prior … including myself.

Communities like Reddit’s r/StarWarsLeaks were dedicated to prying out as much information about the seventh film as possible from leaked scripts and art, as well as the whispers of industry insiders (Traitors!). One thing most of said insiders agreed on was that Han Solo was going to die. At first, we didn’t know exactly how, birthing wild rumors such as old hero Luke Skywalker killing Han in a fit of insanity (1). Once the actual scene was filmed in early 2015, however, we knew the details for certain: Kylo Ren kills Han Solo (2).

Word of Han Solo’s death is far from the only thing that reached our ears. In fact, by May, we had enough information to plot the entire movie from beginning to end with about 90% accuracy (3). I went to the theater on Dec. 17 with a checklist in my mind, prepared to fill in the boxes for ridiculous notions like the film opening with Luke’s lightsaber and disembodied hand floating through space or Luke exclaiming “My baby girl!” in the middle of the film’s awe-inspiring closing shot (4).

I was spared of both, thankfully, but I found myself sighing at some of the greater-scope leaks that made it in, such as the main threat being another Death Star that’s just bigger. I didn’t sigh at Han Solo’s death, but I was disappointed that it was the greatest plot development the film had to offer, that absolutely everything about the film leaked before it and that we ultimately received exactly the vague retread said leaks implied. 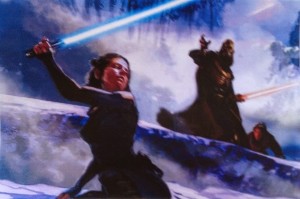 Concept art for the climax of “The Force Awakens,” portraying protagonist Rey and antagonist Kylo Ren in a lightsaber duel. This piece, along with many others, was leaked onto the internet in 2014

Do I regret following the leaks? Not at all; it was a fun pastime that lengthened my enjoyment of the film. Also, the reality is, I didn’t have to be a fanatical leak-guzzler to know Han Solo was going to die. I could have just looked to the oft-repeated stories about how Han’s actor Harrison Ford wanted his character to die so much that he fought for it and almost got his way in “Return of the Jedi,” only losing because it would’ve rendered the rescue arc in the first thirty minutes moot.

“The Force Awakens” was the most opportune time for the writers to kill him off for two reasons: It made for a sweet parallel with Obi-Wan’s death in “A New Hope” and there was no one else they were willing to kill off. The obviousness and easiness that comes with “The Force Awakens’” biggest and only memeworthy leak spells out the biggest problems with the movie.

Series creator George Lucas once referred to “Star Wars” as poetry, and before “The Force Awakens,” it indeed followed a certain beat. In the prequels, protagonist Anakin goes from light to dark, the Jedi fall and the Sith rise. In the original trilogy, antagonist Anakin goes from dark to light, the Jedi rise and the Sith fall. Thus, it goes like 123321.

“The Force Awakens” isn’t a 1, though. Recycling the plot from “A New Hope,” it’s a 3. We’re thrust into the bad guys once again crushing the good guys with no transition. What’s the First Order? Where did it come from? “It’s an offshoot of the Empire,” they all say. Do we know anything else about it? Nope.

Of course, plenty call Lucas’ pattern ridiculous, and I agree to an extent, but there’s no denying that it exists. It was abandoned along with the assumedly more fitting story treatments he offered Disney, the new owners of the franchise. The reason for this is that Disney wants nothing more than to please with this new trilogy. They know that people hate the prequels (and Lucas) and love the original trilogy. Thus, they slammed the door in Lucas’ face, sending the papers in his hands flying, and rehashed the original movie.

See, the first part of that plan might have been good for quality without the second half; a more justified break from the pattern would have been something totally new instead of something rhyming off-beat. Since we didn’t get that, exposition is an ignored necessity. When it comes to filmmaking philosophy, the main thing “The Force Awakens” takes from “A New Hope” is that it has to be personal; the journey of a few people in a vast, scary world with no focus on said world’s politics or history. What it doesn’t take from “A New Hope” is that film’s self-containment.

In “A New Hope,” Luke Skywalker, a wimpy farm boy from Tatooine, learns he is the son of a Jedi and embarks on a quest, growing into a hero and losing every friend and family member from his old life along the way. In the end, he defeats the evil Grand Moff Tarkin once and for all by honing his new Force abilities and mixing them with what he learned as a farm boy, saving the galaxy.

In “The Force Awakens,” our hero is Rey, a scavenger from … uh … She’s the daughter of … ah … Well, they’ll get to that stuff in the sequel. Anyway, she goes on an adventure and easily bests everyone who comes her way with the supreme fighting skills she already has from the very beginning because … uh … sequel! That’s coming, remember? In the end, she beats the evil Kylo Ren, who has trained all his life in the ways of the Force, in her first lightsaber battle ever, but he gets away because the ground splits between them. He’ll be back in the sequel. 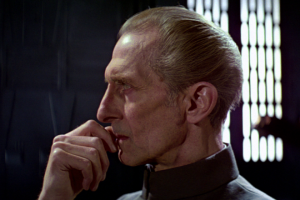 The final shot of Peter Cushing as Grand Moff Tarkin in “Star Wars: A New Hope” (1977)

Don’t get me wrong; I didn’t want Kylo Ren to die. His inner battle is the most interesting facet of the film. However, his lightsaber duel with Rey should have been left for a moment in which contrivances couldn’t save him. There are going to be sequels, remember? On the other hand, I doubt anyone would cry for General Hux or Captain Phasma, but both of them live to see another film as well, with another villain played by Benicio del Toro confirmed to join them. That’s right; the film is all introductions with no conclusions and no arc, yet the trilogy still isn’t done with introductions.

“Star Wars: The Force Awakens,” while outrageously fun, gets nowhere, and I struggle to envision how almost the entirety of whatever story Disney’s ensemble of writers and directors have to tell is going to be contained in the next two. Maybe that’s because I’m in denial of the most likely outcome: Repeats of 1980’s “The Empire Strikes Back” and 1983’s “Return of the Jedi.” Holding the most overhyped spoiler in history reveals the worst in both people and “The Force Awakens” itself.