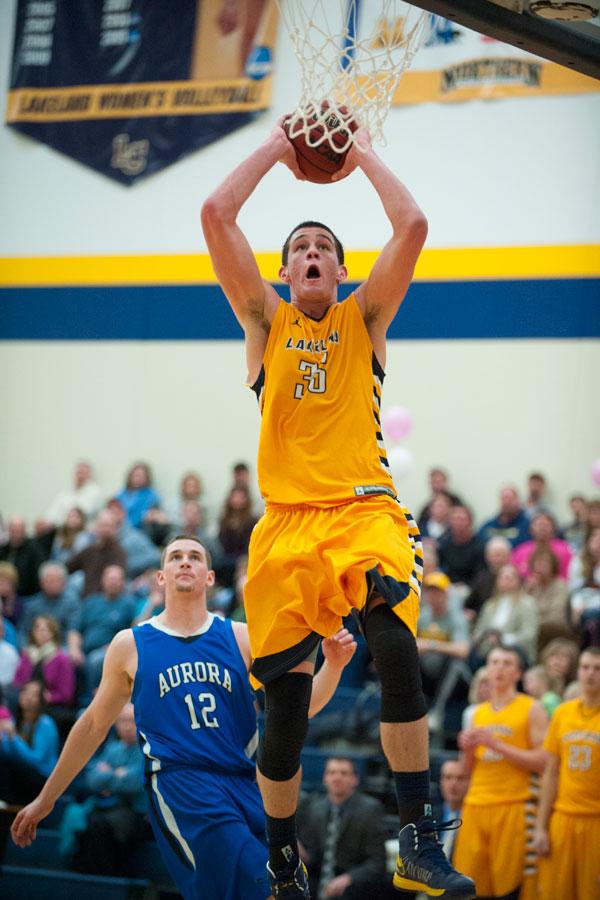 Justin Ward, a junior business management major from Wisconsin Dells, believes in teamwork, and it was this team player attitude that helped him achieve a 1,000 point career milestone in a victory over Rockford College on Jan. 19, thus elevating him to a league only seen by 38 other players in all of Lakeland men’s basketball history.

Ward is one of four captains of the team. “He leads by example with his hard work in every game and practice,” said Brandon Hagenow, freshman exercise science major and fellow teammate.

“My teammates are a big part of my success. This is a big milestone for me, but I see better things in the future for our team and individually,”

“We have high goals this year for the team that involves reaching the NCAA tournament, and that ultimately means more to me than 1,000 points.”

Assistant Basketball Coach Sam Schroeder describes Ward as “a human highlight reel on the court and a dedicated student-athlete. He has an enormous amount of potential and the sky is the limit.”

“He is my biggest influence and part of the reason why I got into basketball,” Ward said.

Having been raised on the game and now enjoying a flourishing collegiate career, basketball has always been an integral part of his life and his fellow Muskie teammates have become his second family.

“It makes a lot of memories when you play with a bunch of people that share the same passion as you,” Ward said.

Ward is looking forward to having even more basketball memories before he graduates next year.

“When I look back after college,” says Ward, “I want to remember NAC tournaments and NCAA tournaments, looking at the stat book, and seeing all the points.”

After graduation, he would like to continue playing basketball and has considered playing overseas.

Right now, however, he plans to focus on college and finish strong, wearing that golden number 35 jersey and enjoying the knowledge that it symbolizes his part in something far greater than himself.