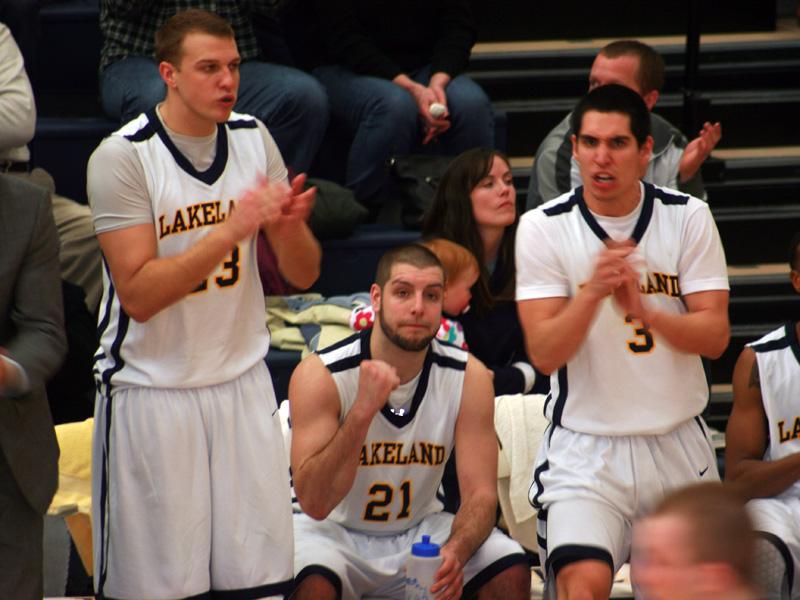 The glossy court of the Woltzen Gymnasium shimmered under the lights which illuminated the true stars of the evening—the Lakeland men’s basketball team, adorned in their gold armor, battled valiantly against Rockford College on Jan. 19.

It was number 21 who captured the most attention as he sunk three-pointer after three-pointer, little did the fans know they were witnessing Muskie history as one of those shots made Jake Schwarz the top men’s scorer in all of Lakeland’s 150 years of existence.

Schwarz, a senior marketing major from Sheboygan, tied the previous record, held for decades by John Koslowski (1980-84), of 2,008 career points after sinking a three-pointer in the first minute of the second half. Later in the half, the Muskie forward would make what seemed to be another innocent three-pointer, a common enough shot for someone with his record, but, deep down, Schwarz had an inkling of what he had achieved.

“I had an idea, because I knew how many points I needed going into that game,” Schwarz said, but he was not fully aware of the milestone until the announcement boomed over the speakers, declaring he earned the title of the college’s all-time men’s scorer and had achieved a career total of 2,022 points. He received a standing ovation from everyone in the gym. Of that stellar moment, Schwarz said his ultimate sentiment was that of sheer alleviation, “I felt relieved, like a bunch of weight had just come off my shoulders.”

Schwarz has been one of the brightest Muskie stars since being recruited freshman year. He led the Northern Athletics Conference in scoring and free throw shooting, was ranked eighth nationally in NCAA Division III in scoring, and was named First Team All-NAC, second team all-region by NABC, and third team all-region by D3hoops.com in the 2011-12 season alone.
Despite all of his accomplishments thus far, nothing compares to being the new men’s all-time scorer.

“[My biggest accomplishment] individually would be breaking the school’s all-time scoring record this year,” Schwarz said, and added that making it to the conference tournament championship last year was his team’s greatest accomplishment in his collegiate career.

Interestingly enough, Schwarz had only been consciously trying to break the record for a year and a half.

“I mean, when I first came in as a freshman and sophomore, that wasn’t one of my goals,” Schwarz said. “I had no idea that I would be able to come so close and the last couple of years my coaches said, ‘you have a chance to do it,’ and then I kind of just got it in my mind; it made me work a little harder.”

Breaking the record was certainly the farthest thing from his mind during his early years as he adapted to collegiate basketball after having played all throughout high school on Sheboygan South’s team.

“It was very difficult early on because the speed of the game was so much faster. The guys were just so much bigger, stronger, and faster—it took me a couple of months to get used to it, but I did,” Schwarz said. “I’ve learned a lot since I came in as a freshman, and I’ve just matured and gotten older.”

“[Schwarz] has improved his game every year and that’s a testament to all of the hard work he puts in during the off-seasons,” Josh Regal, former teammate and current assistant coach, said.

Schwarz shares that the transformation from Muskie newcomer to all-star would not have been possible without the support of his coaches and the potential they saw in him from early on, in particular Head Coach Aaron Aanonsen.

Aanonsen was actually an assistant coach when he recruited Schwarz out of high school. After Schwarz officially committed to Lakeland, Aanonsen took over as head coach and the two have enjoyed a dynamic partnership ever since.

“[Schwarz] is a vital asset to the men’s basketball program, and his on the court presence will be greatly missed [after his graduation],” Schroeder said. “It was a pleasure playing with and coaching him in the past five years.”

Ironically, Schwarz perhaps felt closest to his coaches after severely injuring his knee while practicing for the 2010-11 season. Aanonsen and one of the assistant coaches, having gone through similar injuries themselves, were there to aid Schwarz in perhaps one of the lowest moments of his life through training advice and verbal encouragement. With their help and through individual perseverance, Schwarz was able to make a comeback.

“The best advice they gave me was ‘just keep your head up. Don’t let your highs get too high and your lows get too low,’” Schwarz said.

Schwarz keeps the above so close to his heart that he reiterates this advice to any students that are thinking about going into collegiate basketball.

After an exceedingly successful collegiate career, Schwarz will be hanging up his Muskie jersey at the end of the season as he prepares for graduation. If everything falls into place, however, his basketball won’t be collecting dust anytime soon.

“If everything goes as planned, I would like to go over to Europe to play basketball,” Schwarz said. “But, if that doesn’t happen, I will probably stick around in Sheboygan and go into the family business of ‘Schwarz Fish.’”

In any case, Schwarz says he is much more focused on breaking into professional basketball after college than anything else. While playing in Europe would be a dream come true, the downside is that his biggest fans, parents Brett and Amy Schwarz, will be unable to attend his games.

“My parents have been there for me since middle school, and since my high school and college days they’ve probably missed only five games total,” Schwarz said. “The fact that they aren’t going to see me play all the time really sucks.”

While his parents are not very sports oriented themselves, they have always supported Schwarz, and his mother is known for being a terrific cheerleader from the stands.

“She still doesn’t understand [the rules of basketball],” Schwarz said. “She just yells and screams, and it is pretty funny. Some of the guys give me flack for it, but she’s been that way since high school, and it’s neat.”

Aside from his parents, Schwarz will miss his Lakeland teammates and the time they spend on and off the court. His comrades reciprocate the sentiment.
While Schwarz is sorry to depart from his immediate and Lakeland family, he leaves with a sense of satisfaction and is comforted by his dear memories of the small campus, ranging from traveling to Prague, Czech Republic with his teammates, to his mother’s proud cheers, to the multitude of accomplishments he and the Muskie men have achieved as both individuals and a team, including his being only one of three players in all of Lakeland’s history to garner over 2,000 points.

Whether he travels to Europe, goes pro, or continues to reside in Sheboygan, Schwarz has forever left his mark on the Lakeland community, but, in turn, it has impacted him. Schwarz will always recall the little campus hidden amongst the cornfields as the institution that opened the doors of the greater world to him.