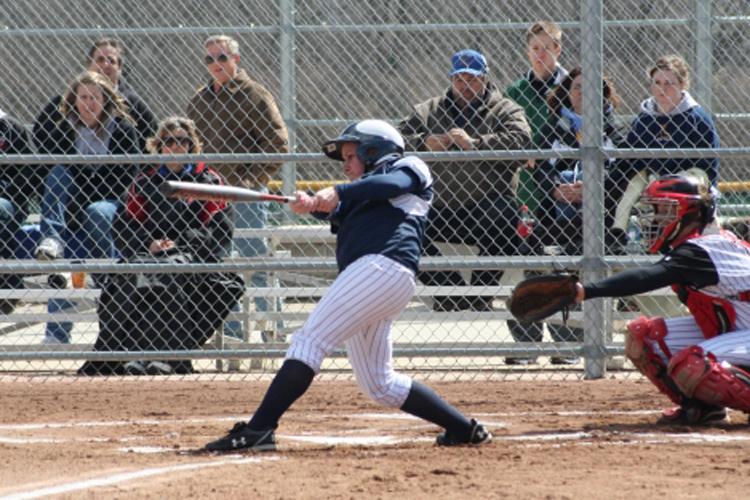 The Lakeland softball team is off to another good start at 14-10 under Coach Chad Buchman. Though there are many reasons why the team is so successful, a big one is the play and leadership of the team’s sole senior, left-fielder Leah Sheahan.

Sheahan (as of print date) is hitting .359 with 1 home run and 15 RBIs this season. She also has a .438 on base percentage. This is nothing new for Sheahan who, in her career at Lakeland, has a .347 batting average with 12 home runs and 83 RBIs. Though her numbers are impressive, Sheahan’s quality as a leader is what sets her apart the most.

“Leah is a great softball player and teammate,” junior Jenny LaLuzerne said. “She definitely acts as a leader on the team. She is someone I can look up to and respect. She is a wonderful example of what you can accomplish if you work hard.”

“She exemplifies pride in the program and discipline on the campus,” Buchmann proudly said of his left fielder. “On the Lakeland College campus she is a role model and understands that players need to represent a positive perception of who they are and who we are as a program.”

Buchmann, who heavily recruited Sheahan out of Wilmot High School near Sheahan’s hometown of Salem, Wisconsin, spoke highly of his star player.

“She brings the commitment level that every program needs,” he continued. “When younger players struggle she talks them through it and relates to them with her experiences when she was a younger player. As a team leader she [also] does a great job reiterating the program’s philosophy with the younger players and sticks to the game plan.”

Sheahan said she tries to help the younger players out because she knows the coaching staff can only help so many players at once, so she tries to be a veteran leader as much as possible.

“I try to voice my opinion and try to help out whenever possible,” Sheahan said.

Sheahan’s passion and leadership stem from the pure love she has for the game. The game of softball has been a large part of Sheahan’s life.

“I was probably three or four [when I started] in my backyard,” she said. “[After that I went] through tee ball all the way up until now. My mother, she played when she was young, so (she) kind of instilled the softball qualities into me.”

Sheahan lost her mother two years ago when she suffered from a brain hemorrhage.

“It was devastating,” Sheahan remembered. “Like the whole world flipped upside down. We were lost, and to an extent still are, without her.”

Sheahan said she has used the game as a means of healing. Though much has changed, the game of softball has been a welcome constant in her life.

“Ever since my mom passed away I feel like I have a newfound passion for softball.” Sheahan said. “She’s just kind of driven me. That’s one of my motivators. She was at every single game throughout my college career.”

Sheahan’s strong relationship with her mother was evident to Buchmann as well.

“Her late mother was the epitome of energy and loving support for all,” Buchman said. “Leah’s mom is an inspiration to our program and to Leah as she finishes up her awesome career.”

Though her physical presence will never again be present from the benches behind the softball diamond, Sheahan knows her mother is still there in spirit, cheering loudly from the heavens for her favorite player in the blue and gold No. 4 jersey.

“Not a day goes by without reminders or thinking of her,” Sheahan said, “Every time I play it takes me back and I think of her. I love the game myself, and I know she loved it too.”