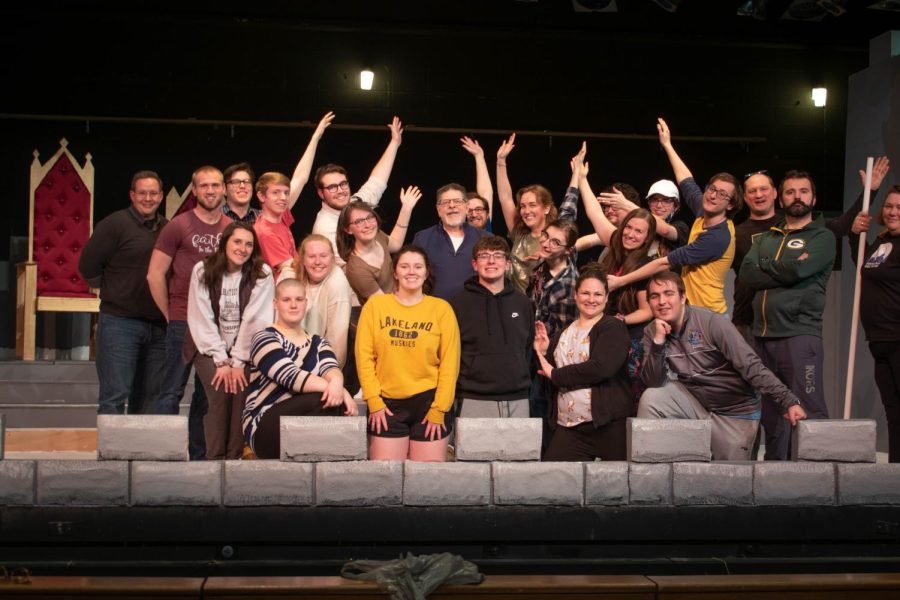 The spring musical, Once Upon a Mattress, debuted Thursday, March 31 and ran through Sunday, April 3 and featured many of our talented students and some of our amazing alumni. The alumni who returned for this performance are Becky Charbonneau, Brian Charbonneau, Shqipron Qunaj, Elizabeth Plotka-Heinen, Holly Green, Dylan Zastrow and Zach Mock.

Becky and Brian Charbonneau are two exemplary examples of how the performing arts can have a lasting impact on individuals’ lives. Becky graduated in 2000 obtaining a bachelor’s in Education and has been impacting student’s lives as a choir teacher, instructional coach and director of performing arts for over 40 years. She was incredibly grateful for the opportunity to come back and be a part of the performing arts here at Lakeland. She says, “My husband and I both are just so impressed with the students. They really know their stuff, and it’s been really fun being a part of it, and it’s been fun watching Charlie work!”

She hoped the audience enjoyed the lightheartedness of the performance and walked away feeling inspired. Brian supported his wife’s sentiments by saying, “Hanging out with Charlie and the students has been great! Charlie is such a great example for us to try and follow as far as he always gets the best out of people in a very productive and kind manner that is not insulting. It is just, amazing!” Brian graduated in 2003 with a degree in Education and has taught in the Milwaukee school district for 14 years. He is currently teaching in the Sheboygan school district.

Holly Green and Elizabeth Plotka-Heinen, graduates from 2012 and 2015, were incredibly excited to be back at Lakeland!  On Holly’s decision to return, she said it was due to it being “Charlie’s last performance! And this is my way of thanking him for being the first one to give me an actual part or role.” Likewise, Elizabeth said, “Charlie is such a great director, I just jumped at the chance to be in his last show. I have a lot of great memories here, and it’s such a great opportunity. I think doing theater here taught me how to be the best version of yourself. And to be proud of who you are!”

Shqipron Qunaj, a graduate of 2011 in International Business, sids that the creativity of people is what draws him to theater and is what made him so excited to participate in this show. “Charlie has no shortage of creativity and when he initially contacted me, I immediately said, sign me up. And it has been such an amazing, fun experience.” Shqipron also says, “You know, Lakeland University is one of those underrated schools. It is such a uniquely diverse school, so many people from all over the world. It just made me feel welcome and at home, right away!”

Dylan Zastrow and Zach Mock, graduates from 2021 and 2019, were excited for the audience to witness the comradery of the cast. Dylan said his start to theater began a few years ago, “A guy named Charlie walked up to me and said, hey, you should be a part of a show! And I did it and loved it! I wanted to come back, so I could pay him back and thank him for everything he gave me.” Zach Mock, a graduate in communication with a psych minor, also expands on Charlie’s impact on his own life; “I have participated as Assistant Director for 2 other shows after I graduated as Charlie has continued to be one of my biggest influences as a student and graduate of Lakeland.” Zach speaks to the impact of community here at Lakeland by saying, “It is like I never left!  Every time I step on Lakeland’s campus, I know I am accepted.”

The cast and crew were especially excited for the audience to experience the comedic and heartwarming story they have been working on all semester. To learn more about the cast and crew, visit https://lakeland.edu/news or today.lakeland.edu/events.