Spring Musical, “The Fantasticks,” Comes Back to Lakeland after One Year 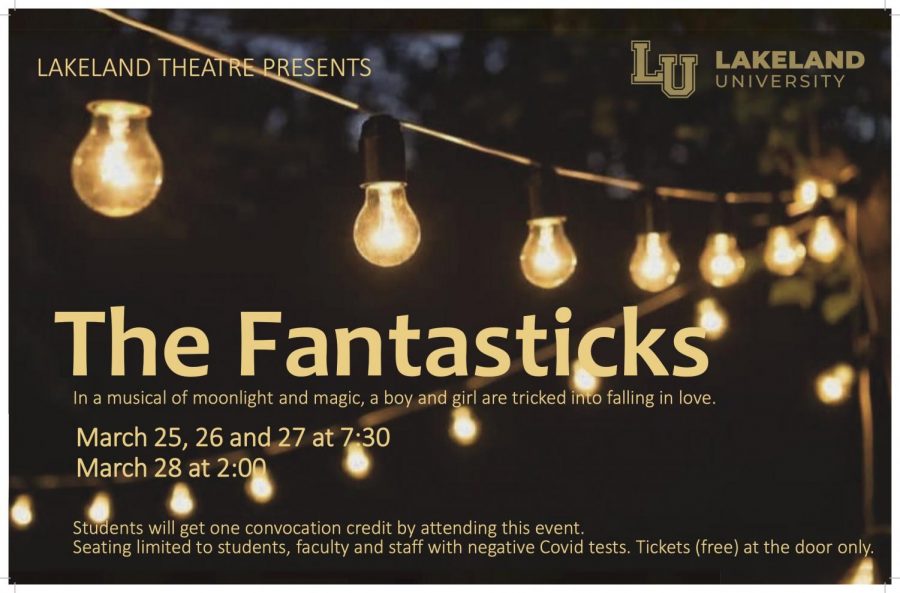 Spring semester at Lakeland University usually has sports, plays, and everything someone could imagine, but last year in March everything was canceled, but this year we are in full swing for all the sports, theatre, and more!

This spring Lakeland is presenting “The Fantasticks” written by Tom Jones in 1960. Charlie Krebs, Lakeland’s theatre director, mentioned the reason he picked this musical, “We have done a number of musicals which are more ‘pop’ and our Choir Director wanted us to do a show that had more classical music. The Fantasticks was the perfect show for this. It is also the longest-running off-Broadway musical and has an appeal to a wide audience.”

“The Fantasticks” is a romance about a boy and a girl, who are tricked into love by their fathers. Knowing that there is a pandemic going on, the play had to have a few changes to it. Krebs explained, “The two young lovers would normally hug and be physically close to one another–that’s how we had it staged a year ago. Since the actors shouldn’t be hugging, I bought some very thick white rope which represents their love. We have the actors embrace opposite ends of the rope to signify how they feel for each other.”

Krebs explained that some of the scenes had to be changed because of the social distancing and so he wrote scenes to explain how things have changed and how to follow guidelines from the Center for Disease Control and Prevention. Krebs also explained the scene of all the dancers holding hands but since they cannot hold hands the choreographer had the idea of hula hoops, so the dancers are socially distanced and still being able to do the scene as it was intended.

Student Chloe Skibinski, who is a senior student and performs a solo both in the opening and closing numbers, mentioned that, “I think figuring out how to navigate a love story without touching hands has been a creative challenge. We came up with a lot of ways to safely portray the two main characters’ love for one another.” Skibinski also explains that since this is her senior year she wanted to go out with a bang, so she is doing the show again, and she also explained that she has the best cast members she could ask for.

There are some rumors about the retirement of Krebs; however, according to him, he will be around for at least two more plays, one in the fall and one in the spring. “Next fall we will be producing a play I’ve been writing for over five years and my last show will be ‘Once Upon a Mattress’ in the spring of 2022. I was going to retire this year but with the shows from last spring and fall canceled, I thought that would be an anticlimactic way of ending my career, so I have one more year,” Krebs explained.

The spring musical, “The Fantasticks,” will be performed in the Bradley Theater on Mar. 25, 26, and 27 at 7:30 p.m. and Mar. 28 at 2:00 p.m. Lakeland University will also be allowing in-person attendance for the play as well as free live streaming. Following the CDC guideline, seats are limited to students, faculty, and staff on campus and only 83 people can sit in a room of 500 seats.