Pepper, the Wave of the Future 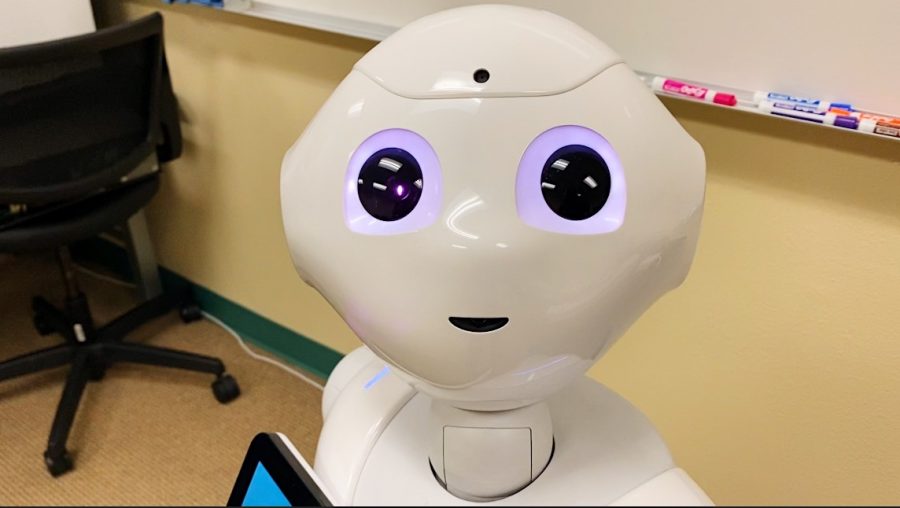 Humanoid robots, called NAO, are now a thing of the future here on our campus with Lakeland University’s Abby Juozapaitis and a professor and mentor Cynthia Lindstrom.

A collaboration online session, called “Innovation Spotlight: Lakeland University’s Emotion-Reading Robot,” was held on May 10 by Lakeland’s Computer Science program and The Surge, a community of problem-solvers, entrepreneurs, and innovators based in Sheboygan County, WI. They interviewed Juozapaitis and Lindstrom about their trailblazing research and discussed the potential impact of humanoid robots.

Juozapaitis took on this project with Pepper, which is a Lakeland robot, to help others, especially those who have Autism. She had been working on this project since her sophomore year and had continued even after she graduated in December of 2020. Juozapaitis wanted to accomplish facial recognition and emotion detection ability, examples of that would be a smile, frown, and blank or neutral faces as well. She also made the codes by herself, and that was her honors project and with the help of Lindstrom.

After talking to Lindstrom trying to figure out how and why this was possible, she explained, “Robots, and especially humanoid robots, will be part of our lives… The newer Pepper humanoid robot is a social humanoid designed for human interaction.” Peppers are already at airports or already taking orders in restaurants in the real life. It would not be long before one of us is talking to the robot cashier, or the next robot bartender, which had already been implemented in Nev.

Juozapaitis and Lindstrom explained that the spread of COVID-19 did not help them with these studies. Juozapaitis got to take an NAO robot home over the summer to help further along with Pepper’s programming. She explained, “I started doing basic work with Pepper when Lakeland received the robot in 2019 but did the majority of my work with Pepper in the spring of 2020 before we got sent home due to COVID-19 and in the fall of 2020.” She did all of her work split up between two different semesters, to work with Pepper instead of the NAO robots.

Juozapaitis also mentioned that “I also had a goal of getting the user’s face or reactions displayed via her tablet but was not successful or ran out of time in fall to complete that before I graduated.” So, Juozapaitis hopes that once COVID-19’s pandemic is over, or more manageable that she will be able to come back and hopefully be able to work on Pepper more or even help in the computer science program on campus. She left the coding at Lakeland University as well, in hopes that Lakeland will create an Advanced Programming course for students to take and learn more than what is offered in the courses now.

For Lindstrom this is not the first robot work she has done, she explained, “I have had other students develop amazing applications and work on research with the robots. Dan and Nick Koerber presented award-winning research using the NAO robots in Boston two years ago.” For Lakeland University, this is just the start of robot learning. She expressed, “I am very excited to continue using our robots in the classroom and research. My students are up for the challenge!” Knowing this, we all might be seeing more robots around campus.