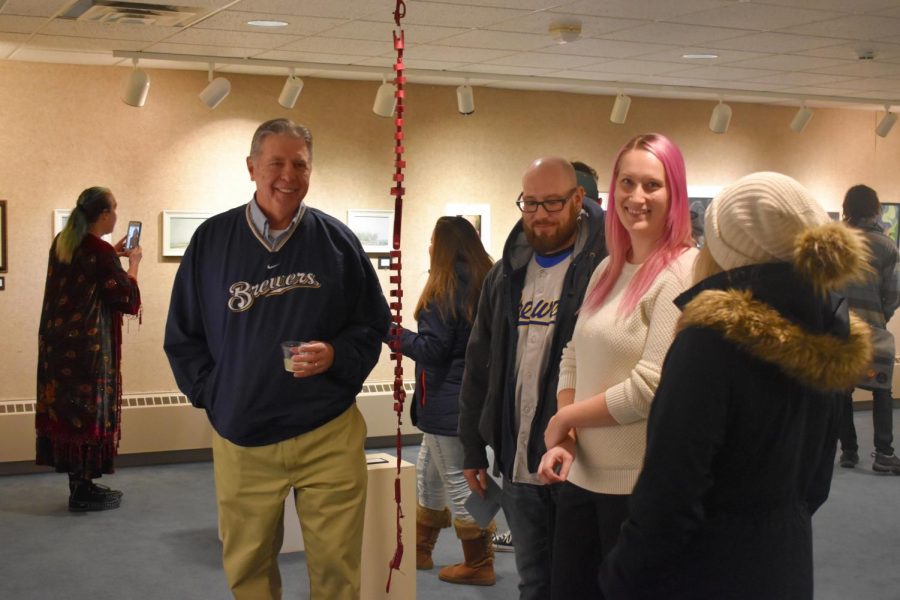 On Friday, Oct. 12, featured artists Bill Weidner, Monique Brickham, Dionne Landgraf, and Mark Weber presented their works of art put on display in the Bradley Theatre. The event lasted an hour, starting at 4:30 p.m., giving each artist an opportunity to discuss their projects.

Bill Weidner, art studio professor at Lakeland, started the night by discussing his various works ranging from paintings, sculptures, and photography. He explained how some of his personal experiences had inspired some of his work, including a thought-provoking painting titled “I Want to Die,” a piece that shows a multi-colored disfigured man with his nose extending through the eye.

About the piece, Weidner said that a year and a half ago, he was bedridden in the hospital due to a complication from back surgery. Afterward, Weidner had to lay flat on the area that caused him pain, and according to him, he “woke up from a nap in the middle of the afternoon and kept saying ‘I want to die.’”

After Weidner, Dr. Dionne Landgraf of Silverlake College presented some of her oil on linen paintings of Lake Michigan. Landgraf has worked on different paintings of Lake Michigan. “The importance of the water in our community is vital, and just by presenting this tribute to appreciate and view and study and be part of, I think it always emphasizes that water is a gift in our lives,” she said. For each of her works, Landgraf will “build up and tear down” sections of a piece by adding layers. Living near Northpoint, Landgraf said she can work on these landscapes either on-site or in her studio.

Following Landgraf, graphic design professor Monique Brickham displayed some of the logos she’s designed over the last two years. The logos come from Brickham’s freelance work she keeps up alongside teaching. According to Brickham, when she creates a logo, she tries to capture the personality of the company she’s working for by asking, “If you were to visit their website or walk into their store, what does that space feel like? And then, how can I translate that feeling into a visual design?” She wants viewers to have a sense of what the brand is about when they see her logos. “You see the words, and then you see the symbols, but then you understand a little about who they are in the way that those things look.”

Ending the presentation, Mark Weber, teacher in graphic print production, explained the illustrations he had on display. He showcased prints of his commissioned illustrations, two of which were commissioned by his son Zackary: one of a pelican feeding its babies and the other of Christ holding a baby. Weber had his son explain the illustrations. “The pelican is an image of God, who gives himself to us as the bread of life,” Zackary said. “The one on the right, for me, is an image of God, who wants to hold us as a son or a daughter.”

At the end, the presenters said they would be available for any further questions, ending the night by thanking everyone who could be there.

The exhibit will be on display in the Bradley until Nov. 13.