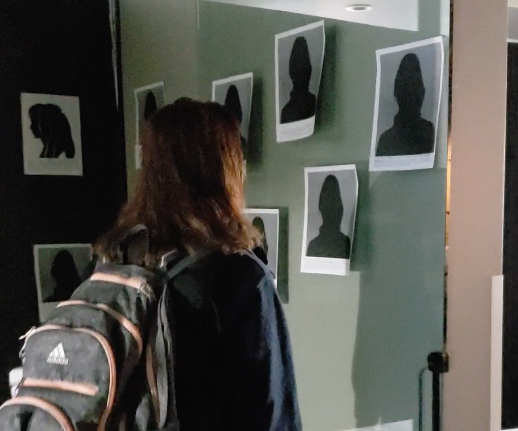 On Thursday, Oct. 25, the community of Lakeland was given a rare opportunity to walk inside a man-made tunnel created by the Student Success Team.

Displaying the various types of oppression our world has to offer, the event was in the works since last Spring and will take place again next year. Open to the public from 10 a.m. till 1 p.m., anyone who walked through the tunnel this year could receive a free t-shirt at the end.

The tunnel, created with black sheets, trash bags and paper, wound from a side entrance of the Entrepreneur Studio through a nearby corner and ended near the study rooms. According to Student Success Coach Mara Poullette, “We picked the space so that it would be very visible, but it definitely posed a lot of challenges. We tried to make it dark, and it’s in the most well-lit space on campus.”

Following a conference where she learned of a concept for the tunnel, Student Success Coach and Dean of Students Leslie Laster said she returned to Lakeland and shared the idea with her colleagues. Looking into the tunnel on other campuses, Laster said she continued looking into different university’s displays, sending her research to her team members.

The Success Team also invited student organizations to be active members of the development and display. When inquired about the organizations’ involvement, Poullette said, “We want them to feel like they had an actual impact on the campus, that they have leadership experience and that they ultimately were really representing the ideals of their group.”

Laster also made a comment, pointing out the value of student involvement, “This is your experience as a student. So, if I have my team generate everything, it’s going to be based on our view as older adults. And so, when you’re talking about cultural issues, social justice, I think it’s important to get the student’s perspective.”

Once inside the tunnel a person could walk through and read the various displays of statistics and information provided on several topics. Whether it was gallery text or pictures on display, the sections provided information on each subject. The themes chosen were poverty, mental and physical disabilities, LGBTQ and religious discrimination, domestic and sexual violence and African-American oppression.

According to Poullette, the Success Team brainstormed ideas regarding the themes of the tunnel, even researching other universities’ presentations and drawing inspiration from those versions. The team also valued keeping the interests of Lakeland students in mind. “We tried to touch on issues that are relevant to our students, but also relevant to life in general,” Poullette said.

When talking to students about their experiences, they shared what caught their eyes and their own thoughts on the tunnel’s themes.

Sophomore Megan Austreng was a bit surprised by the outcome. “I guess I expected less history and facts, and more ‘if this was you’ situations,” she said. She anticipated the tunnel “to put you in a situation rather than tell you the history.” While she found all the event’s themes important, two sections stood out for her the most. “The disabilities stood out for me, as did the #MeToo project,” she said.

When asked if she learned anything new through her experience, senior Jensen Bukouricz said “It was a lot of stuff I already knew or had a vague idea about, but just more specific.” However, Bukouricz does believe Lakeland should continue the event next year. “It’s definitely an interesting experience.”