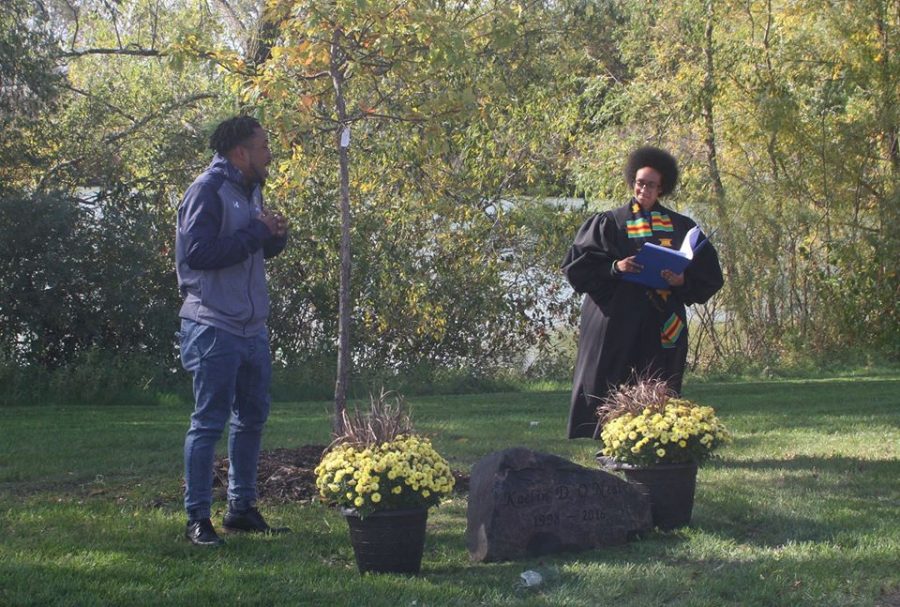 Moses tells a story about O’Neal.

“We are thankful for the richness of love and friendship shared and gathered for our friends who we miss and who we love and have loved, and we will never forget them,” Cade-White said.

After the hymn, the group migrated to O’Neal’s memorial items next to the football field: a wooden bench and a stone with O’Neal’s name on it under a newly-planted tree. Cade-White blessed the items and called for friends of O’Neal to share their memories of him.

Junior communication major and football player Diante Moses spoke about O’Neal’s adoration of Carolina Panthers quarterback Cam Newton. “He wasn’t playing no games with Cam,” Moses said of O’Neal. “If you said anything wrong about Cam, he’d be offended.”

Moses ended his story with a tribute. “I can’t forget about him,” he said. “I have to rejoice for the fact that he’s in a better place, and we’re playing this game for him this Saturday. No ifs, ands or buts. We’re gonna ball out for Kaelin.”

After Nault led the group in one more song, Cade-White let the group depart. Some members of the football team stayed behind to honor O’Neal.