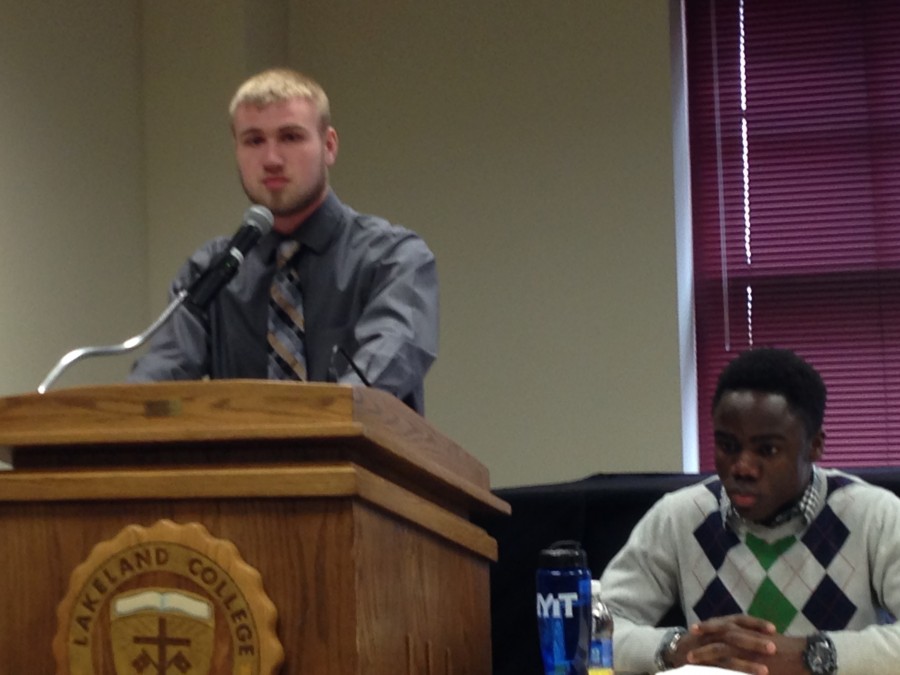 With voting for next year’s Student Government Association approaching, candidates squared off in a debate to help students get to know their causes.

The Meet the Candidates Debate took place on April 5 in Laun 209. The two parties, the Student Integration Movement (SIM) and The Seven Muskieteers (T7M), sat at separate tables while Student Success and Engagement Coach Corey Roberson moderated from a podium between them.

Much of the Student Integration Movement’s ticket is comprised of returning SGA members. Current Executive Vice President Joseph Legate and Vice President of Academic Affairs Christian Gillaspie are both running for another term in their positions, while current Vice President of Student Affairs Nate Cooper is running as the party’s presidential candidate.

The Seven Muskieteers consist entirely of would-be newcomers to the SGA. Legate pointed to the party’s general lack of political experience as a reason students should not vote for them. T7M members pointed to their strengths in related areas, with Vice President of Budget and Finance candidate Matt Seider emphasizing his position as president of the math club.

To see a quick video from the debate, featuring a question from Blacknall that both presidential candidates answered, click here.

The second half of the debate was dedicated to specific questions from audience members and Roberson. Making note of a perceived lack of students engaged in Greek life in either party, one audience member asked the less experienced candidates how they would communicate with fraternities and sororities.

T7M Vice President of Student Services candidate Joshua Hogan said he would go straight to the Inter Greek Council leaders about behind-the-scenes affairs and have mass emails sent to students for Greek events, while Bagnall-Newman pointed at The Lakeland Mirror as a means for keeping communication between Greeks and the rest of the student body loud and clear.

Lakeland’s looming change from college to university was a hot topic throughout the debate. T7M’s presidential candidate Zach Mock and Vice President of Public Relations candidate Emma Schad both cited helping students with the transition as a primary goal for their party.

On the opposing side, SIM Vice President of Student Affairs candidate Avinash Limbu argued that students could adapt to the university change by themselves and stressed the importance of making further changes based on their complaints.

In his closing statement, Cooper called the Student Integration Movement “change you can trust.” Mock took the opportunity to clarify that the purpose of The Seven Muskieteers isn’t to lead, but to “have everybody lead” as figurative Presidents and Vice Presidents.

Voting for SGA begins on April 11 and will run until April 15 in the Campus Center Lounge.