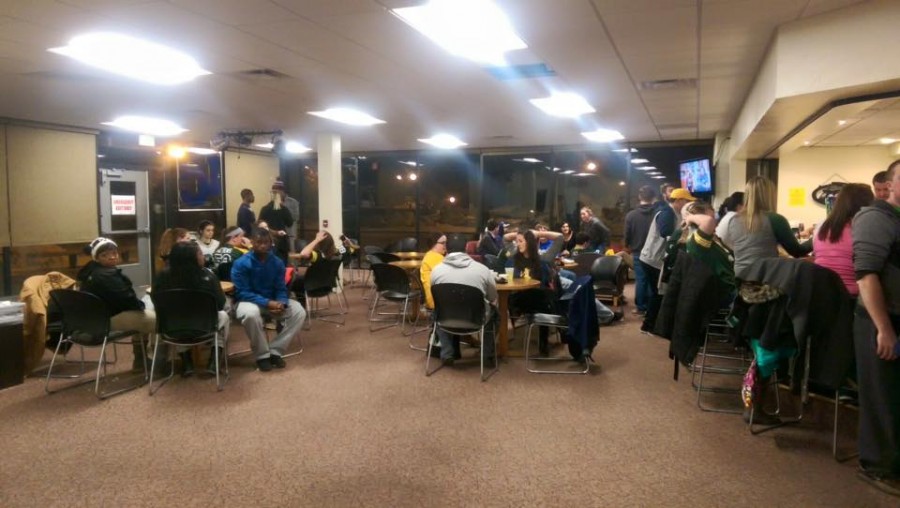 On Saturday, Jan. 16, Residence Life hosted the divisional round of the playoffs with the Green Bay Packers and Arizona Cardinals. The game was very intense throughout, keeping everyone in tune with what was happening.

This event was held in the 1862 lounge, along with nachos courtesy of Lakeland College Dining Services.

“It was a great turn out, I’m glad a lot of people came,” said Joey Lehto, Hall Director and a grad student working towards his master’s in counseling.

The students in the 1862 Lounge were on their feet, hoping for a miracle, when the game came down to its final seconds when Aaron Rodgers threw a Hail Mary pass down the field to backup wide receiver Jeff Janis, with five seconds left and the Packers down by 7.

As Janis jumped over Patrick Peterson and Rashad Johnson to come up with the catch to bring Green Bay within 1 point, the Lounge erupted with excitement.

After the Cardinals won the coin toss at the beginning of overtime, the fans in the lounge seemed to be pretty calm until the unspeakable happened.

The Cardinals’ quarterback, Carson Palmer, evaded Clay Matthews and a few other Packer defenders to hit wide receiver Larry Fitzgerald across the left side of the field. From there, Fitzgerald ran the ball 75 yards to the Packers’ five yard line.

Everyone in the Lounge was shocked at what happened, but excited that the Packers got another chance to stop the Cardinals from scoring.

After a stop on the first down, Palmer did a shovel pass to Fitzgerald to end the hopes of a Super Bowl this year for the Green Bay Packers. The final score of the game was 26-20.

Lounge fans were disappointed, could not believe what had happened and that the season had ended so suddenly.