High prices at Muskie Mart due to low storage 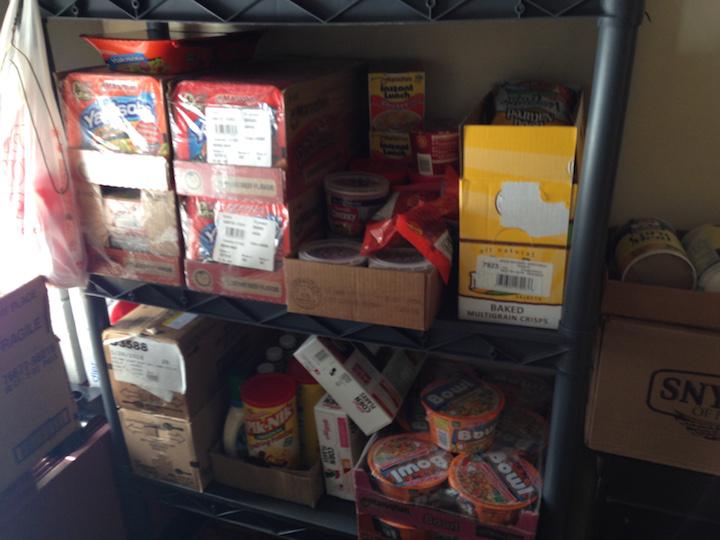 One of two small storage racks in the Muskie Mart storage room, holding ramen and chips.

Lakeland’s Muskie Mart has been one of the main stops for students in need of quick meals, snacks and everyday items for years. While convenient, behind-the-scenes limitations may be draining their pockets.

The convenience store, located near the cafeteria in Bossard Hall, has a visible disparity in pricing with off-campus stores. As shown in the photo gallery, this was tested by finding the prices of eight products of varying classification and value in the Muskie Mart and comparing them to the prices of the same (or, in the case of the Froot Loops box due to the lack of an exact match, larger) products at Walmart, the most prevalent retailer in the country.

Disregarding sales tax, buying the eight items together at the Muskie Mart would cost $34.28, while buying the items together at Walmart would cost $21.09, which is a 63 percent change. The difference in price of each individual product varies greatly. However, out of the eight items tested, a product at the Muskie Mart costs, on average, 90 percent more than the same product at Walmart.

Muskie Mart manager Kathryn Sommerfeldt, who has been with the store for 18 years by her own proclamation, found the disparity easy to explain.

“We have no storage room,” Sommerfeldt said. “So we can’t buy in bulk. If you walk in Walmart, and you see all the pallets with the boxes piled high, they can buy 10, 12, 20 cases of candy bars, where I only can buy one. And right from the distributor, the more you buy, the less it costs. So where we might pay $10 for a box of candy bars, which is way out of line, they’re only gonna pay $6 because they’re gonna buy in bulk.”

Sommerfeldt showed off the Muskie Mart’s storage room, which was connected to her office. Two measly storage racks held a little bit of everything from chocolate to work supplies while the rest of the space was taken up by higher-maintenance goods like soda.

“And that’s the biggest reason why,” Sommerfeldt said.

Asked if she was still satisfied with business, Sommerfeldt replied with enthusiasm, but also voiced a few woes.

“We do a very good business in the Muskie Mart and it’s getting better more and more as time goes on,” Sommerfeldt said. “We probably could do even more, but we have such limited space that we can’t keep all the products that are asked for. I sometimes have to take something off the shelf in order to get a new product. You can see by the store. It’s just way too small.”

Sommerfeldt was adamant that a bigger store would mean massively better business.

“If we can expand the store and get more products, I think our business would probably at least double,” Sommerfeldt said. “At least.”