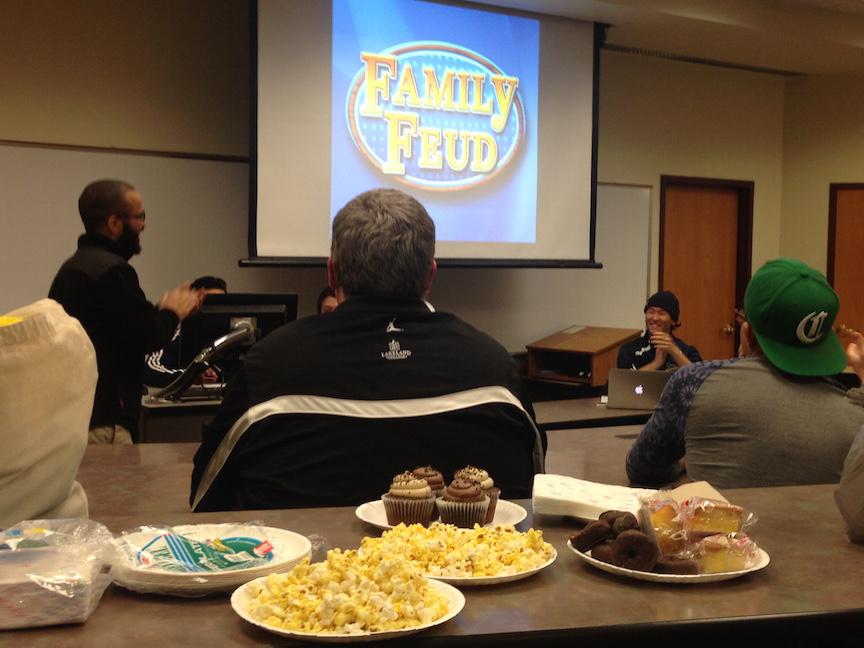 Core III students held an on-campus game of Family Feud on April 13 for both students and faculty.

“Family Feud” is a long-running game show in which groups of 100 are surveyed on certain topics. Two teams then have to guess what the most popular answers were. The winning team moves onto a round called “Fast Money,” in which two members guess five answers to five questions under a time limit. If their cumulative points reach 200, they win.

Core III’s take on the game was a bit different. The game started off with four teams, but only two teams were allowed to face at a time. Thus, the first round took place in two classrooms in the Laun Center at the same time. Spectators were forced to choose which two teams to watch.

All stationed at desks, players and spectators mixed throughout the classrooms. Instead of racing to press a buzzer first in order to get the chance to answer, players raced to raise their hand quickest. Players were not introduced or otherwise named.

A “Family Feud” PowerPoint template designed for schoolteachers was projected in each classroom, holding answers collected from Lakeland students preceding the event.

Most of the survey prompts revolved around the topic of stress. Introducing the game, a Core III student explained that raising awareness for stress qualifies as the community service required of the class.

One prompt asked students what are the most stressful subjects at Lakeland. Science came out on top, with Math and Business trailing behind, but players and spectators alike were shocked to see Core at fourth, with English at fifth.

Another prompt asked students what they do to relieve stress. Exercise, listen to music, sleep, talk with friends and play videogames were on the board, in that order.

Each classroom’s victorious team moved onto an added middle round. Both teams and all spectators walked over to the 1862 Lounge, where the PowerPoint was being set up on a large television screen. This time, players faced off with a “buzzer” smartphone app that indicated which side of the screen was touched first.

On a prompt asking for annoying habits roommates can have, players were hesitant to answer. Being messy, loud, inconsiderate, unhygienic and thieving were all on the board, in that order.

Locked in a tie, the two teams were up against each other in one final prompt, introduced as “common positive strategies for dealing with stress.” However, this was simply a rephrased version of an earlier prompt, “things you do to relieve stress,” and accordingly held all of the same answers. This gave Gallianetti’s team, the team that was in the classroom in which that prompt was used, a strong advantage.

After audience murmurs, Core III student Janel Weir announced a shakeup to the Fast Money round. Instead of having two members of one team participate, one member of each team would compete for a higher score. Repeat answers were not penalized and neither player was timed.

After both players made their answers, the television screen was turned away from the audience as Core III students set up the point tallies. Gallianetti’s team was victorious. The team of six was rewarded with five gift cards.