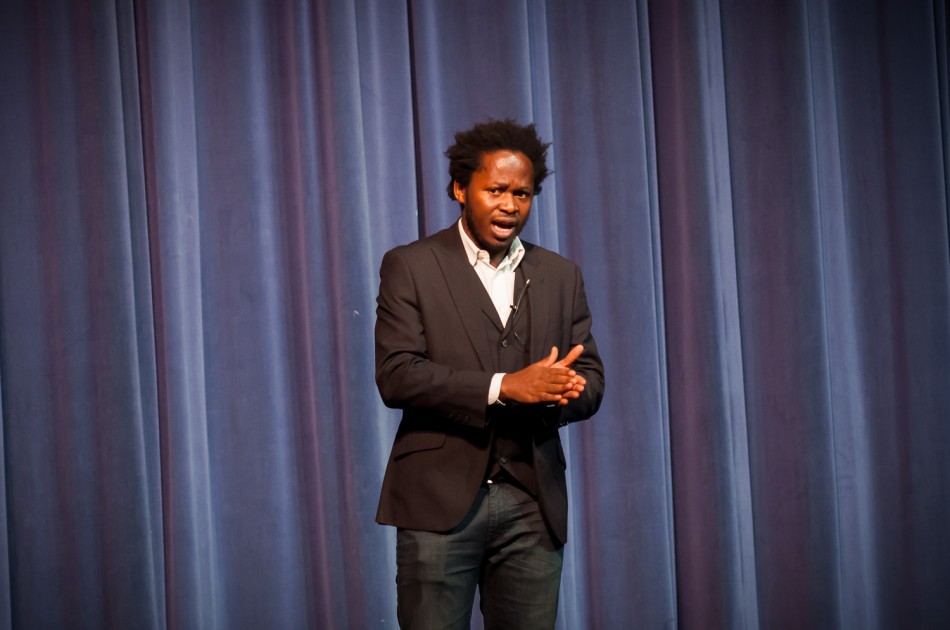 Ishmael Beah, author of “A Long Way Gone,” is the second author to travel to Lakeland for the Community Book Read.

The auditorium was almost filled to capacity as Ishmael Beah, author of the memoir “A Long Way Gone,” stepped to the podium to speak. He had just finished a VIP dinner in which he introduced himself to certain faculty and staff of the college, as well as some international students, and now he was going to address a larger crowd.

He started off slow, staying behind the podium for a while before he gradually walked around on stage. Beah read excerpts from his book, and after, elaborated on them. He talked about his family life and how well-versed in Shakespeare he had become because of the education in Sierra Leone.

Light laughs occurred when he spoke on the current state of hip-hop, but those very same laughs quieted down when he spoke of his first encounter with the war.

“We were all running in one direction,” said Beah. “We could hear the gun fire, so we ran away from it.”

He told of moments in his childhood that made some in the crowd cringe in disbelief. One moment involved watching the mother of a child hold her dead baby in her hands. Another, which was a continuous moment throughout the speech, was when he re-explained that he didn’t get any training, and that the child soldiers had to learn from experience.

He did not only focus on the violence during his speech, but on other aspects of life and the difference between African and American views.

“In Africa there are many truths. In America there is only one (truth),” said Beah. “In Africa, when someone is your friend, they are family. In America, you have first and second cousins that you only see on holidays. I had to learn this.”

The crowd erupted in laughter as he explained that showing up unexpectedly at a friend’s house in Africa is not the same as in America. In America, the norm is to call first to make sure the person is home. In Africa, everyone just stops by their friend’s house when they want.

At the end of his speech, he accepted questions from the audience.

The next morning, he had a question and answer session for students. These questions were a little more personal. They ranged from whether he had suicidal thoughts or not to who his favorite rapper was. He spoke about corruption and how he believes it is everywhere. When asked to compare his home country to ours, he said there is a lot of corruption here, but said the difference is that we are more open to it.

Beah also wants to go back home and live the village life.

“Simplicity is beauty,” he explained.