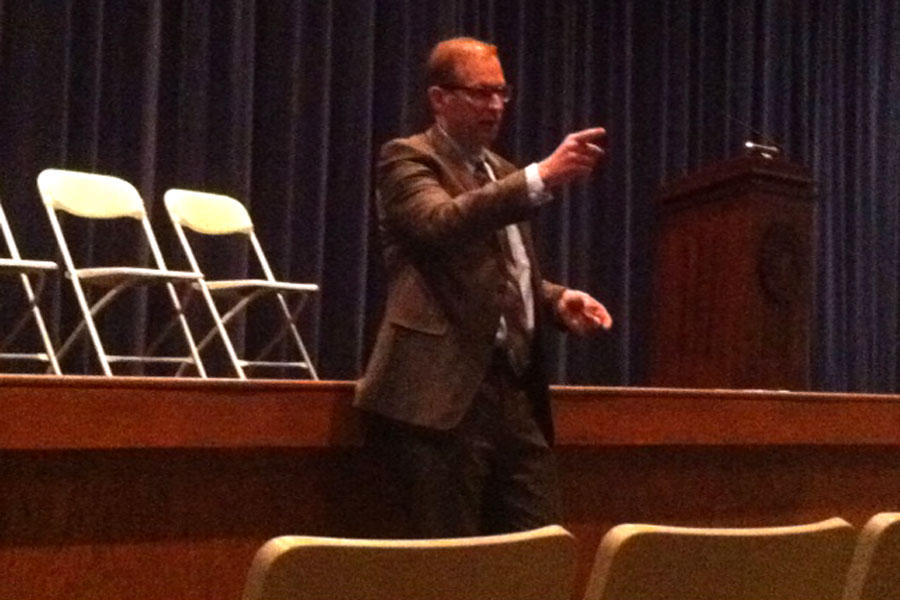 The Lakeland College community received the sudden news of President Michael A. Grandillo’s resignation on Tuesday, March 12, while the institution was undergoing its annual week-long Spring Break. Former Sr. Vice President Dan Eck will serve indefinitely as Interim President of the college. Now the college’s top administrators and directors are reaching out not only to inform the community on the proceedings of the initial press release but also to discuss the institution’s future and the decisions of the Board of Trustees.

“What I would want people to know is I have a lot of faith in Dan Eck. I’ve worked with him for the past five years and I have always really appreciated his insight, his integrity, and his team spirit—he really is a collaborative person,” Meg Albrinck, Lakeland College dean, said. “I’m really excited to keep some momentum going. I know Dr. and Mrs. Grandillo brought some really good ideas to enliven the campus and what I want students and the community to know is I don’t think those good ideas will be lost in the transition.

“That commitment to making Lakeland a better place will be a part of [Eck]’s philosophy as much as it was the Grandillos’. I know it is hard and surprising, but I have taken the position that I have control in how I respond to the future.”

Some Lakeland students were perturbed by news and the vague explanation of “philosophical differences” with the Board of Trustees that served as the basis for the President’s resignation after nine months in office. Such students took to Facebook and utilized online petitions to express their concern.

“I think it is safe to say that literally everyone employed by this college was stunned by the news,” David Gallianetti, director of communications, said. “The fact that it happened during spring break made it challenging to communicate with students and faculty.”

Gallianetti expressed that the press had been tipped off by a reliable source before the college even made its employees aware of the changes on Tuesday, Gallianetti receiving the news only the night before. Such factors contributed to the difficulty in reaching the Lakeland community before they heard the news second hand and rushed the college into their press release.

Since the conclusion of Lakeland’s spring vacation, administrators, directors, and Eck have worked to inform the Lakeland community in regard to the transitions. A faculty/staff meeting was held on March 19 and a student meeting was conducted on March 21.

The student meeting consisted of Eck, Albrinck, Vice President for Student Development Nate Dehne, and Assistant Director of Athletics April Arvan answering questions directly from students. It also served as a chance for them to meet Eck, many for the first time.

Questions ranged from Eck’s former and current role at the college to the Board of Trustees’ part in Grandillo’s ultimate decision to resign. Eck shared with students that he had resigned from his job as Sr. Vice President and was transitioning to another job when called back by the Board to serve as interim president. Eck and Gallianetti also indicated that the absence of Board representatives at the recent meetings was a collective decision made in order to focus on questions directed at Eck.

During the event, some students expressed doubt in the Board of Trustees’ recent decisions.

“I know it is hard to understand [due to] the emotionality of this decision,” Dehne said. “The information [the Board] takes from us and the trust that they have in us, coupled with their experience, help make these decisions for the institution.”

“With 24 minds [on the Board], not everyone is going to agree. How is it that the Board of Trustees is going to function [going forward]? We can’t continue getting rid of presidents because they didn’t agree on the Board’s philosophies,” said a student.

“I can assure there is a lot of soul searching going on. But, I can also tell you this is a highly unusual event for this Board of Trustees,” Eck said. “They are incredibly cooperative and on the same page. If there is any worry we aren’t learning from these mistakes, you should know there is a lot of discussion about what happened and what we are going to do differently.”

To read more on the leadership transitions and to learn more about President Dan Eck and the Board of Trustees’ future plans, continue checking the Mirror online for updates and be sure to read the print article that will be featured in the Thursday, March 27 edition. Also, be on the lookout for an important update on the leadership of the college’s athletic department.