Best of the Midwest competition proves favorable to Mirror staff 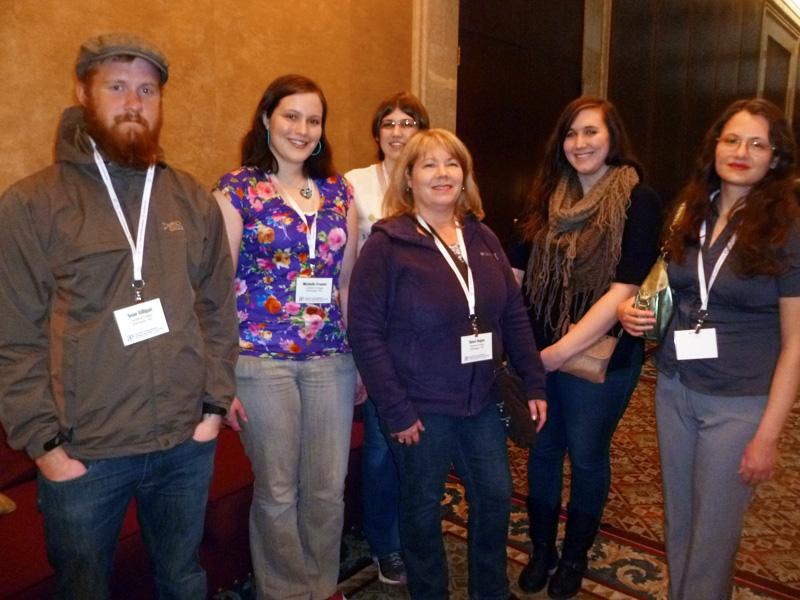 From left to right: Sean Gilligan, Michelle Fromm, Amanda Smith, Dawn Hogue, Katie Amundsen, and Leah Ulatowski stand in the lobby of the Radison Hotel in Minneapolis where the Best of the Midwest College Newspaper Convention was held.

The staff of the Lakeland College Mirror attended the Best of the Midwest College Newspaper Convention in Minneapolis and received second place in the division of four-year non-weekly newspaper in the 2013 Associated College Press Best of Show Awards.

Five Mirror staff members were selected to travel to Minneapolis Feb. 8 through 10, along with Dawn Hogue the Lakeland College Mirror’s adviser, and were able to attend a variety of educational seminars related to newspaper writing. All the events were held at the Radisson Hotel.

The staff members entered several contests for different aspects of news-writing at the convention and were pleased to find after their return to Wisconsin that the Mirror had won second place in its division.

“I am extremely proud of my staff for all of the hard work that they have put into the Mirror this year,” said Stephanie Rebek, editor-in-chief of the Mirror. “The Mirror demands a lot of time and devotion from our staff and editors. Getting second place is proof of my staff’s dedication to putting out a great issue.”

The edition of the Mirror that the staff submitted to the Best of Show contest was published on Oct. 11, 2012. It was the second edition of the fall semester and featured articles on the front page about Kellen Winslow becoming Athletic Director and about the new sign that had just been put in at the intersection of county highways A and M.

Other highlights of the second-place issue included headlines such as “Communication major to be finalized,” “Landgraf’s portraits resonate with our daily lives and culture,” “Homecoming 2012 highlights,” “Matt Troyer named Mr. Muskie 2012, winning despite twin sweater situation,” and “Muskies split weekend volleyball games, win Homecoming, and raise awareness.” These and other articles can be read at www.lakelandmirror.com.

The editors and managers of that successful edition of the Mirror were the same as they are currently. The staff reporters at the time included Katie Amundsen, Brittany Beckmann, Sean Gilligan, Heather Hartmann, Alec Noa, Amanda Smith, Joshua Schartner, and Benjamin Wilks. Also included was guest writer Alyssa Nedbal. All are undergraduate students at Lakeland College.

“We may have won second place in our division, but I’d love to be in first place next year,” said Michelle Fromm, managing editor of the Mirror.

Indeed, the five staff members who attended the convention gleaned plenty of new tips and techniques to put into play for future issues of the Mirror, making the goal of first place look quite a bit more attainable for next year.

“I thought the best part of the convention was receiving a critique on The Mirror,” said Leah Ulatowski, copy editor of the Mirror. “I was ecstatic to receive a compliment on my lead writing and found [Lawrence] Baden’s advice to be incredibly useful.”

Lawrence Baden is a journalism professor from Webster University in St. Louis, Missouri, who personally read and critiqued an edition of the Mirror. He spoke with the staff at the convention, freely giving out both compliments and advice to the eager-to-learn writers.

Lakeland students who pay close attention to the Mirror may notice small changes gradually being added as the staff seeks to accommodate the helpful advice that they received both during the critique with Baden and at the various seminars they attended throughout the weekend.

The convention had a definite focus on the new technologies that are coming to be associated with the changing world of journalism in a variety of ways.

“The Best of the Midwest Convention was a good experience to get an idea of what is going on in the journalism world, and the mediums and technology being used to tell stories,” said Gilligan.

Ulatowski and Amundsen attended a seminar that explained the details of networking using a variety of social networking websites. In today’s world of fast information, “news-writing isn’t limited to just newspapers and not even to just websites,” said Ulatowski. “You also have to use these social websites to build your networks and promote yourself.”

Other seminars that the staff found valuable included a discussion of freelance writing and a workshop focused on being a good editor.

Smith, who is looking forward to a career in the world of journalism one day, said, “The Best of the Midwest was a fun experience, and I learned a lot about the career that I am interested in.”

Beyond the speakers, a big part of the convention’s experience included interacting with other college journalists and learning from them and their newspapers.

“The Best of the Midwest was a great experience because we got to join with other schools, look at their newspapers, and find ways to improve our own paper,” said Amundsen. “We learned a lot from the experience.”