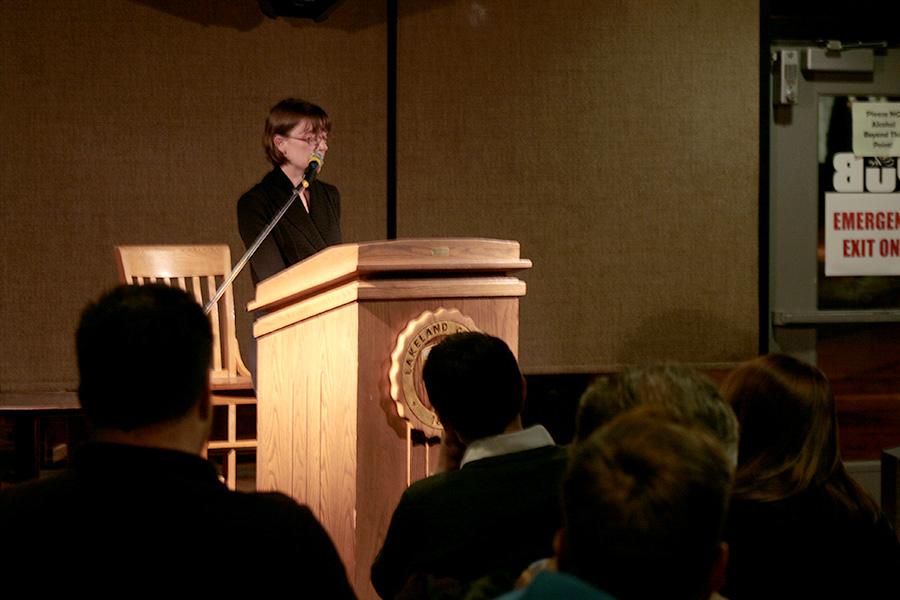 Lenox dazzles the crowd gathered in the pub with her passionate poetry readings.

Poetess Stephanie Lenox is a petite woman with snowy skin and a coy smile. When she graced the stage of Lakeland College’s Pub on March 20, it was hard to believe that this pretty and composed mother of two has a deep fascination with the bizarre things in life.

Nate Lowe, associate professor of writing, introduced Lenox as the 2007 winner of the Slapering Hol Chapbook Contest for her chapbook, The Heart That Lies Outside the Body, and noted her numerous nominations for the Pushcart Prize. He also mentioned that as a child, Lenox preferred being called “Dorothy” or “Queen of the Birds” rather than her own name, which certainly hinted at her quirkiness.

When Lenox first addressed the crowd of about 40, she did not even allude to her success. Instead, she held up the cover of her first full-length collection of poetry, Congress of Strange People, which depicts a circus act from 1921 called “lion man.” After showcasing the Chewbacca-like figure, Lenox joked, “I hope you appreciate that I did shave; this is not my best author photo.”

The title of the collection was based on the name adopted by the Ringling Brothers’ traveling troupe. Originally, they were called “Congress of Freaks,” but the performers had reservations about the derogatory term. Eventually, the group changed their name to “Congress of Strange People.”

In the collection, half of the poems are devoted to the eccentric characters in Lenox’s family while the others center on the oddities found within the Guinness World Records.

One of Lenox’s most famous poems, “The Heart That Lies Outside the Body,” is a dramatic monologue inspired by Christopher Wall. He is the longest known survivor of ectopia cordis—a rare condition in which the heart forms outside the body before birth.

When Lenox first encountered his tale, she asked herself, “How does someone like that live—not only physically but also emotionally?”

Ultimately, the question piqued her interest in other “strange people” and inspired her collection.

While many of Lenox’s poems were dramatic monologues in which she assumed the voice of a Guinness World Record holder, she struggled to “get into the heads of certain characters” and “didn’t want to force it.”

An example of such a character is Tom Leppard who has approximately 99.9 percent of his body covered in leopard-skin design tattoos. He lived as a hermit on the Isle of Skye for 20 years before moving into a retirement home in 2008 at age 73. Since Lenox could not easily assume his voice, she did the next best thing—imagined the musings of someone who was intimate with him.

“Though I’m not a needle, let me touch you. / Let me look into the pink secret of your ear,” read the provocative lines of “Making Love to Leopard Man.” “How I wish the children who torment you would throw stones / at the ugly hut of my life and scatter like birds / when I glare at them.”

In addition to her “Strange People” series of poems, Lenox also read works that dealt with subject matter such as mating squirrels, the jerk who left fish in the office refrigerator and even an ode to the word “um.”

According to Karl Elder, Fessler professor of creative writing, poets and non-poets alike can benefit greatly from attending poetry readings.

“Among the joys of listening to a fine poet like Lenox is—without the distraction of shifting, extrinsic, visual data for the mind’s attention, as with film—there is serious opportunity to more thoroughly exercise and thereby enhance imagination,” said Elder.

“I really enjoyed listening to Stephanie Lenox read her poems. Her witty and playful style made for a fun reading environment, and she had a great presence on stage,” said Amundsen. “There are some poetry readings that will put you to sleep, but this was definitely not one of those readings!”